A strange thing happened today. As I was moving three floral arrangements around the campus of the retirement community where I work, several people told me not to leave them where I intended. The flowers were cheerful, aromatic, and gorgeously arranged so it was strange to me that no one wanted them. When I asked what the rejection was about, the message was clear every time. “They are funeral flowers!”

Well, yes. They are. They were delivered to our campus for the memorial of a beloved resident who died. Her daughters asked if I would take them from our chapel — which isn’t used much during the week — to locations in the main lobby, skilled nursing, and assisted living units. They wanted the residents to enjoy the beautiful arrangements made in honor of their beautiful mother. What a lovely idea and kind gesture. Or so I thought. 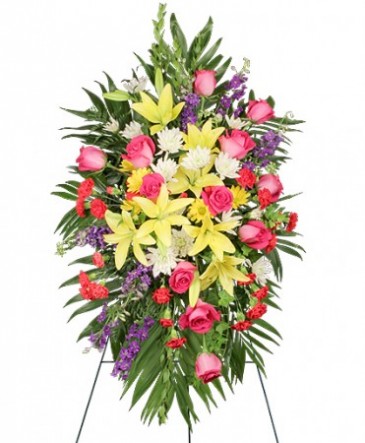 I was busy catching up on emails and admin tasks when my colleague Brad arrived for the day. He said, “What is your plan for the flowers in the rotunda?” To which I replied that the rotunda was my plan, as it gets a lot of traffic and more people would see the flowers there. He then told me the sales director wanted them moved ASAP because funeral flowers don’t send the right message when someone walks in our doors for a tour.

As a side note: our company’s new motto is Live with Promise. We recently rebranded and took away the word “retirement” from our community, replacing it with the word “living.” Apparently the word retirement carries the stigma of being put away, and a retirement community is a place you go to die. So now we only live.

I got a handcart for the other two arrangements and pushed them across the campus toward our skilled nursing and assisted living units. As I got off the elevator for assisted living, one of the staff asked hostilely, “Where are you going with those?” I told her I was going to place them in the lobby to be enjoyed by the residents and guests. She told me I wasn’t going to do that because the residents don’t like them. Though I’m not sure if she was really speaking for the residents or for herself, she said they don’t like to be reminded about death. I tried to engage her in conversation about this, but she deflected, so we compromised about the flowers. She would take the arrangement to her office, dismantle it, and make new, smaller arrangements that wouldn’t scream funeral!

Later, I ate lunch on the screened patio by the pool. (It’s one of the few public places where employees can eat their lunch.) As I took my seat, I noticed that the large arrangement from the rotunda had been moved to the porch. Now it was in a place where maybe 20 people would see it in a day, and with the Florida humidity, the flowers will wilt by tomorrow. A coworker came out to join me for lunch and hesitated as she approached my table. Looking at the blooms behind me, she said, “I don’t know if I can eat here. I don’t like seeing those flowers.” This staff person has worked at our retirement community for over a decade.

I have to remind myself that not everyone has had as much exposure to dying and death as I have as a pastor and chaplain. And I need to remember that even those who work regularly with the dying, like medical professionals, are often uncomfortable and superstitious around death. And I know that talking about death and even thinking about death makes many people uncomfortable. So I’ll try to moderate myself a bit as I write on…

Today’s experiences with the flowers reminded me just how guarded our culture is about death. Maybe shrouded is a better word than guarded. It’s like we are trying to put curtains up between us and the reality of death. As though a flimsy sheet could erase the reality altogether. This guarding happens even in places like retirement communities and hospitals where death is frequent.

Try this small exercise. Pause from reading this post and say, “I am going to die.” Let that sentence hover in the silence around you. Give it a good minute. Then maybe say it again. Say it out loud and slowly.

How did that feel? What are you feeling? And more importantly, why do you think saying that simple, direct, and true sentence makes you feel the way you do?

I remember the moment I consciously stumbled upon and accepted my own mortality. I was a chaplain intern at a large hospital. The chief pathologist invited any chaplain who was interested to view an autopsy. Call me crazy, but I rushed to put my name at the top of the list. I’d always been curious about and fascinated by the body. I wondered how all of the organs that I read about in my science books could fit inside a body. And, did they swish around in some kind of goo? Or, were they floating in air, doing some kind of delicate dance, not touching one another?

So I got to see a full autopsy — one where they not only emptied the chest cavity, they even extracted the brain. The process was clinical and methodical but not at all cold. The doctors showed great respect for the body out of respect for the person who had lived in it. As they removed organ after organ and took samples from each, I remember this moment when I said inside my head, “I’m going to die.”

In that moment I got the chills. That sentence zinged out of my head, shot down into my heart, and then reverberated throughout my own torso, plunging down into my toes. I may have shook a bit on my stool because the doctor turned and asked if I was okay.

“Yes,” I replied, “I’m okay.” And I was. Facing the reality of my death was, literally, breath-taking. Startling. A little bit scary. Very humbling. And more settling than I can explain.

Staring at the empty chest cavity of a human body — a body that once housed a living, breathing, vibrant woman, and then realizing that my body would one day be empty of my personality, my breath, my being — I was rattled but then settled. I faced the fact that I would die. It would be real. People would have to deal with the loss of me. I might experience pain while dying, but it also might be over before I even know what’s happening. I will die. I can’t control that because it is simply a truth. Death is natural. It is normal. It is common. It will be part of my story just as it is part of every human’s story that ever was.

I understand the fear. The resistance to and avoidance of the topic. The attempts to distance ourselves from the reality of death, foolish and unhelpful though they may be. I understand it, but I wish this wasn’t our way. I wish more of us used the words death, dying, dead, and died rather than vague and prettied euphemisms. Because death is. And denial and euphemisms don’t help us manage-well all the living, dying, and grieving that we do on a daily basis.

If you are still with me, there is good news here too. Dying and death can be the most beautiful days, hours, and moments you could ever know.

As a chaplain, I’ve supported hundreds of people in the long and short times preceding death. Many of them are afraid, but not about the impending reality of their death, or even the finality of death. They fear the not knowing of those paper-thin moments between life and death. At the very end, what will they be aware of? What will they feel? Will there be pain?

Beyond this fear, there is usually calm, peace, and a lot of rest and sleep. And here is where the beauty arrives. When people stop denying, fighting, or cushioning themselves from death — when they face death, speak it aloud, and accept it — then they are able to relax deeply into the moments that remain.

Dying people who accept their dying cherish more. Their senses are heightened because they know they have precious little time left to smell the roses, to feel the smoothness of your hand in theirs, to float pleasantly along the chords of their favorite music. They want to spend time with their loved ones. They want to tell their stories. They want you to feel comfortable around them and treat them with the same love, respect, and dignity that you showed them before you knew they were dying. They are still the same person, it’s just that their body is dying.

Spending time with people who are dying and their loved ones has been one of the greatest honors of my life. It’s pure time, like when you hold a sleeping newborn and feel their rhythmic breathing and perfect skin. Or when you sit at the park on a comfortably sunny day and simply take in the breeze and the sounds of children playing. Or when you are flying in an airplane and it’s all weightlessness and white noise and the view out the window is cotton ball clouds over soft blue skies. These pure times are meant to be taken in. To be held. To be breathed. They are a holy pause that we store and remember later when the grief comes.

When you spend time with people who are dying, all the stupidity of life falls away. No one cares about celebrity gossip or small town gossip, what kind of car you drive or who has gained a few too many pounds. They focus on what is true, what is important, and what is enduring. It’s time full of phrases like, I love you. Do you remember the time… Thank you for… I want you to know… I’m sorry for…

There is time and space for laughter, tears, warm hugs, hand-holding, singing, reminiscing, and for peacefully spinning dreams that may never happen.

Yes, there are instances near death when modern medicine cannot overpower the pain of disease and that is difficult to witness. But the vast majority of deaths I’ve attended have been quiet and calm with minimal pain. And most of these deaths have been peaceful times saturated with the sacredness of life and wreathed with the beauty of love.

I wish we would not fear death — the reality or the word.

I wish today’s flowers were colorful, happy reminders of a kind and contented woman who we shared life with, rather than funeral flowers that pricked us into depression or made us recoil.

I wish more people had the courage to be uncomfortable and use straight talk about death. I think it would be kinder and more helpful for our own acceptance and well-being.

Death won’t come faster just because we speak of it. But if we are able to think and speak of death with a calm, no-nonsense manner, we will be better able to live our lives to the fullest, to live with promise, and to breathe deeply of the roses.

2 thoughts on “Why Is Everyone So Afraid of Flowers? Some Unmorbid Thoughts on Death.”